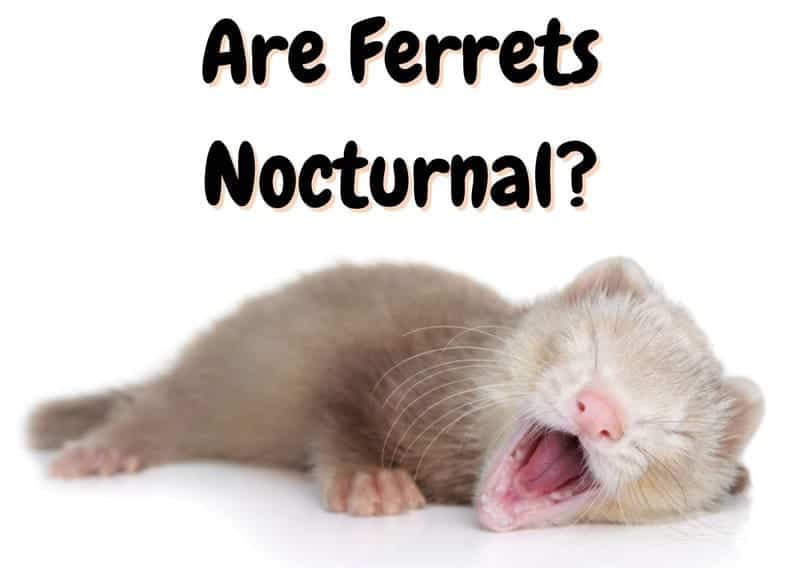 When you are thinking of getting a ferret as a pet, it is important to know whether it will match up with yours both so that your animal gets enough attention and you can still get enough sleep. So, are ferrets nocturnal?

While many people do call ferrets nocturnal because that is the term they are more familiar with, this is actually not the truth. Ferrets are crepuscular, meaning that they sleep both during the day and at night and are more active at dawn and at dusk.

In this article, we will also go over other questions you might have about ferret’s sleeping habits and you will also discover the time of the day ferrets like to play and whether or not you can change your ferret’s sleep schedule to fit your daily routine.

Let’s start by describing a few different terms that are important to know when looking at animal sleep patterns: nocturnal, diurnal, and crepuscular. The first, nocturnal, describes a sleep pattern when an animal spends most of the night awake and is a lot more active at night in comparison to the daytime.

Diurnal is a sleep pattern that we as humans are much more used to, but a word many of us are a lot less familiar with. When an animal is diurnal, it is usually awake or more active during the day and sleeps at night.

Finally, crepuscular sleeping patterns mean that an animal is most active at dawn and dusk.

Are ferrets nocturnal, diurnal or crepuscular?

When it comes to ferrets, many people mistakenly identify them as nocturnal, but this is actually not the case. Ferrets are actually crepuscular, meaning they are most active at dawn and dusk. Your ferret will likely sleep in the middle of the day and at night and be more awake when you first get up and before you go to bed.

This is perfect for most people who work or go to school during the day because it means that they will be home when their ferret is most active.

Young ferrets or kits sleep pretty much all the time. In fact, many kits will sleep up to 22 hours a day, just waking up to eat, go to the bathroom, or play for a very short period of time before immediately going back to sleep. As they grow a bit older, the amount of sleep they need each night will gradually decrease.

Adult domesticated ferrets still sleep a lot, but usually not as much as wild ferrets. They usually sleep for about 18 hours a day, split up between cycles of eating, playing, exploring, and going to the toilet. Whenever your pet ferret is awake, it will likely only be for an hour or two before he goes back to sleep.

In the wild, ferrets and polecats are still crepuscular, but they tend to sleep even more than domesticated ferrets do. For example, the black-footed ferret (the most common wild ferret in the United States) sleeps up to 21 hours every day, only waking up to hunt, go to the bathroom, find or make a new burrow, etc.

Are Ferrets More Active At Night?

Many ferrets do stay up a little bit later into the night and may remain active for a little bit longer than you may want if you are trying to go to bed. However, they will still sleep for most of the night.

The fact is, ferrets need a lot of sleep. Most ferrets sleep anywhere from 14 to 18 hours every single day, but not all at once. Usually, they will sleep about half of those hours during the day and the other half at night.

Are Ferrets Noisier At Night?

A common concern for people when bringing home a new pet, especially a new small pet like a hamster, rabbit, or ferret, is that it will be awake and making noise all night, making it impossible for you to sleep.

The good news is that because most ferrets sleep all night long, they will not be making much noise at night. However, if you are someone who tends to go to bed particularly early, he might be noisy for the first couple of hours you want to sleep.

Often, it is just a sign that your ferret is not getting enough active time during the day. Your ferret should have at least four hours outside of his cage every single day to play and release his energy, and two of those hours should be before bed.

Because ferrets are crepuscular, he is likely going to want to play early in the morning and late in the evening. However, you should give your ferret an opportunity to play outside of their cage as often as you can or any time that you are at home.

Research has shown that whenever ferrets play, they usually do so intensely for about an hour. After the hour is up, they will then go back to sleep for a few hours, and then the cycle repeats itself. So if you are home all day, do not be surprised if your ferret spends some of the time you have him outside of the cage sleeping.

Another important thing to keep in mind when you are giving your ferret time to play outside of his cage is that these creatures have a knack for getting into trouble, so it is important that you ferret-proof your house or apartment before letting him out to play.

Can You Change A Ferret’s Sleeping Habits?

Can you change a ferret’s sleeping habits? It depends. If you are hoping to change your ferret from a crepuscular animal to a nocturnal or diurnal animal, that is likely not going to happen. However, if you want to adjust your ferret’s sleep pattern slightly so it matches up better with your sleeping or work schedule.

There are a couple of different things that you can do to help make slight adjustments to your ferret’s sleep schedule. First, play with your ferret when you are home. If you just leave your ferret in his cage when you are home, it will not make much difference to him whether you are home or not, so it gives him no incentive to adjust his sleeping schedule.

However, if every time you are home, you let him out to play or explore, he will likely naturally switch his sleeping pattern to match yours.

You should provide him with some sort of bed or hideout that will completely block out light, and you can even consider covering the cage if you want him to sleep sometime when it is not naturally dark out.

Finally, keep in mind that you should never force your ferret to stay awake, even when you are trying to change his sleep schedule. While it may seem like a faster way to make the change, it will likely just end up causing more problems and perhaps lead to distrust between you and your ferret.

Ferrets sleep in a variety of different positions. Sometimes they sleep on their back; other times, they may curl up, and even still, they can sleep in some really peculiar positions because their bodies are long and very flexible. However, your ferret is likely only picking his sleeping position based on what is most comfortable at that time.

If he is sleeping with his stomach up, it likely means that he trusts you because that is a very vulnerable position, but beyond that, one sleeping position does not necessarily mean anything special in comparison to another.

In the wild, ferrets like to burrow and sleep in these burrows. This will help them keep warm in the winter and cool in the summer, and offers them some protection from predators while they sleep. This indicates that ferrets like to sleep in dark and hidden places.

Now, when your ferret is really tired, he will likely just plop down and sleep anywhere, but most of the time, he will find someplace to hide before beginning to snooze. Common places where domesticated ferrets sleep includes inside hammocks, under blankets, under beds, in sock drawers, in or under piles of laundry, under the couch or in between couch cushions, and even under rugs.

Clearly, it is important to watch where you step or sit when your ferrets are out and about – you never know where these mischievous creatures might be napping!

How To Make Sure My Ferret Gets Enough Sleep

The good news is, usually, your ferret will naturally get enough sleep. They will not usually fight sleep to the point of becoming over-exhausted or causing health problems. However, there are some things you can do to help ensure that your ferret is getting enough sleep.

Make sure that your ferret always has access to a dark sleeping place. If your ferret is exposed to light all the time, he is going to have trouble sleeping. When ferrets sleep during the day in the wild, they find somewhere dark to do so. If you want your ferret to be able to sleep easily when he wants to during the day, make sure he has access to some hideout where they can snooze in the dark.

You also want to make sure your ferret is getting plenty of active time. While it may seem counterintuitive to get your ferret riled up if you are trying to get him to sleep more, he is never going to sleep if he feels restless or has too much energy.

Can Ferrets Sleep In Bed With You?

If you are playing with your ferret in your bed, it may happen that he falls asleep there. But should you let your ferret sleep there when you are also sleeping there? The general consensus is that this is not a good idea.

Furthermore, if you let your ferret sleep in your bed all night long, he might poop in your bed, which is bad enough to wake up to, but even worse if you end up rolling over into it.

But if you decide to let your ferret nap in your bed while you are awake or doing something else, that eliminates the safety concerns, so it is a perfectly fine option.