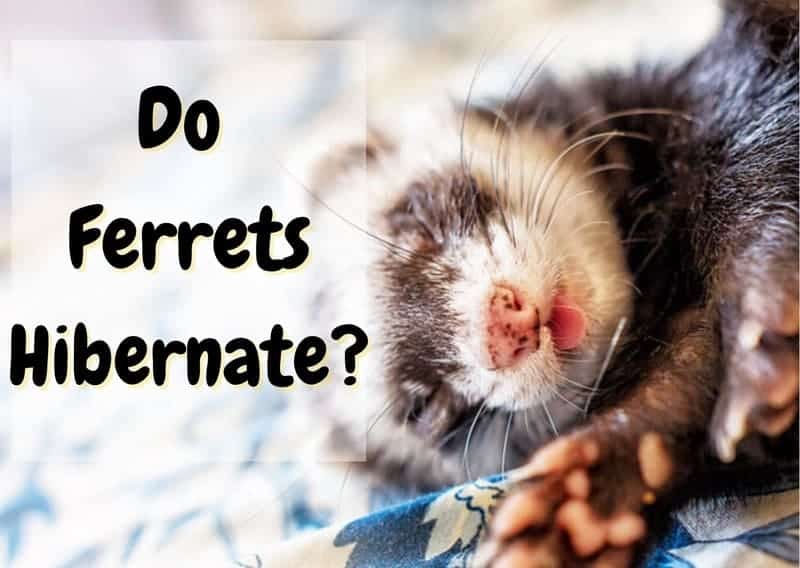 Ferrets are such fun pets, but they sure do sleep a lot. In fact, many ferrets sleep 18 or more hours a day, especially in the winter, which is why you might be led to believe that your ferret is going into hibernation.

So do ferrets actually hibernate? No, they don’t. Ferrets do not hibernate whether they live in the wild or in your home, though there are several key changes that you can expect to see as winter approaches.

Do Pet Ferrets Hibernate in Winter?

Black-footed ferrets do, however, tend to sleep more or get lazier during the winter when they are in the wild. Domesticated or pet ferrets also typically follow this same pattern, so you might notice that your ferret is sleeping more during the winter. However, this sleep is not deep enough or long enough to be considered hibernation, plus it is not done due to limited access to food.

How Do Ferrets Behave in Winter?

Now, despite the fact that ferrets do not hibernate, their behavior does start to change as winter approaches. In fact, you might start to notice changes as early as October, and they usually last until around springtime. Below you will find a list of some of the common changes that your ferret may go through each winter:

Not only will you notice your ferret’s fur start to fluff up, but you may notice your ferret himself start to fluff up or look a little chubbier. In the wild, ferrets have to stay warm enough through the winter and develop enough fat stores in case they cannot find food, so they tend to bulk up. In fact, it is normal for ferrets to weigh up to 40 percent more in the winter than they do in the summer.

As winter approaches, your ferret’s coat might change quite a bit. Usually, it starts to grow a good bit longer, looks fluffier, and your ferret may even grow a full-face mask. You may also notice that your ferret’s fur looks lighter in the winter because the undercoat is generally pretty pale. They will later shed this new coat as it starts to get warmer again.

As winter approaches, you may start to notice that your ferret is a lot more cuddly than he used to be. This is because, in the winter, ferrets have a lot less energy to play and run around. This could be due to the extra weight or just the natural way that ferrets save energy in the wild when they need to direct more energy toward staying warm. For pet ferrets, it may also be because they are just too hot with their winter coat combined with indoor heating.

What is a Normal Sleep Schedule For Ferrets?

Whether it is the middle of a chilly winter or the dead of summer, ferrets sleep a lot. In fact, ferrets are known to sleep up to 18 hours a day, which is why some people start to think that their ferret has gone into hibernation. Let’s take a deeper look at ferrets’ sleeping habits.

1. The Sleeping Habits of Kits

Kits are just baby ferrets, and just like humans, they sleep a lot more when they are babies than when they are fully grown. Ferret kits can sleep up to 22 hours a day, just waking up to grab a bite to eat or go to the bathroom, then immediately falling back to sleep.

The amount that they sleep tends to decrease pretty quickly. Younger ferrets typically only sleep closer to twenty hours a day and are a lot more energetic, curious, and playful once they wake up than most kits are. In fact, as kits start to grow up, they might start to fight sleep because they are too interested in what is happening around them.

2. The Sleeping Habits of Adult Ferrets

Even when they are fully grown, ferrets sleep a lot. Older ferrets can sleep even more than 18 hours a day (as much as younger ferrets) as they age and if they are not particularly active ferrets. Additionally, males are usually much lazier than their female counterparts and therefore tend to sleep more. Sometimes, males even need to be encouraged to get up and get a bite to eat or grab a drink.

Now, this does not mean that ferrets sleep for 18 hours or more all at one time. Usually, ferrets will sleep for a period of time (five hours or so), then wake up to eat, go to the bathroom, play, or get into trouble, and then fall asleep again. Ferrets are not strictly nocturnal and there is no exact schedule or pattern that is considered “normal,” so you do not need to worry if your ferret’s schedule varies some.

Why Do Ferrets Dead Sleep?

The ferret behavior that can cause owners to wonder most if their ferret hibernates is called the dead sleep. It can also cause you to panic if you do not understand what is happening. When ferrets fall into a dead sleep, you can make a lot of noise, pick up your ferret, shake him, pet him, or even pinch his ears and he will not move a single muscle, and he will just hang limply in your arms.

However, you do not need to panic when your ferret falls into a dead sleep. Check to make sure he is breathing, there is a steady heartbeat (even if it is slow), and that your ferret is warm with a wet nose. As long as you can check off all of those boxes, your ferret is just fine.

All that is happening when your ferret goes into a dead sleep is really deep sleep. Some ferrets do this all the time, while other ferrets only do it occasionally or when they are really tired. No one knows the exact reason why ferrets sleep so deeply sometimes, but it is completely normal and nothing to worry about.

How Cold Is Too Cold For A Ferret?

While you might not be comfortable on a cold winter’s night, ferrets can actually tolerate the cold pretty well (a lot better than they can tolerate the heat.) However, you still do not want to expose your ferret to temperatures below freezing.

You will also need to be more careful with elderly or sick ferrets because they may struggle to regulate their own body temperature and therefore won’t be able to tolerate the cold. If your ferret does get too cold, he could end up getting sick, and it can even be fatal.

However, in the winter, depending on how warm you keep your house, you may need to be more concerned about your ferret becoming too hot rather than too cold. When you are deciding what temperature to keep your house at, remember that your ferret is always wearing a winter coat. If your ferret starts acting sluggish or overheated, you should probably turn the heat down.

Just like some humans like snow while other humans can’t stand the cold white stuff, it depends on the ferret whether or not he will like snow. Because ferrets can tolerate the cold so well, some ferrets absolutely love playing in the snow.

On the other hand, some ferrets completely refuse to even step foot on the snow. Remember, if you are taking your ferret outside, you need to ensure that he is contained and safe.

Can Ferrets Live Outside In The Winter?

Your ferret will really enjoy having time outside during the winter, but can he actually live out there? Generally speaking, you should not allow your ferret to be outside all the time (or at all in below-freezing temperatures). Ferrets are fairly sensitive creatures, so if he does end up getting too cold, it can cause a variety of different problems.

Also, the air is generally very dry during the winter and can lead to your ferret becoming dehydrated, which can be very dangerous for ferrets. For these reasons, you should only let your ferret play outside in short increments (usually only between 20 and 30 minutes at a time.)