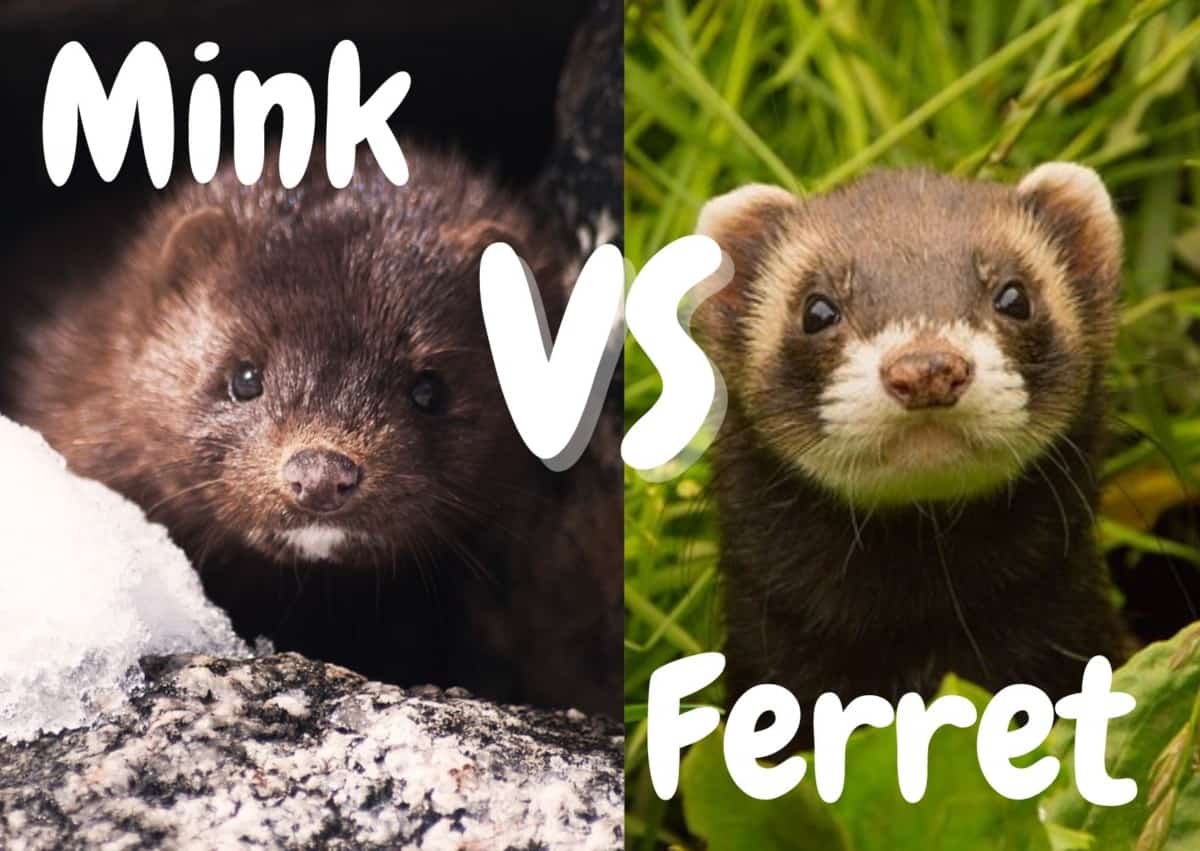 Ferrets and minks are in the same family, so they are very similar in a number of ways and can be easily mixed up. However, there are a few key differences. First, minks tend to be a bit larger than ferrets. Minks are also harder to domesticate and handle than ferrets are.

In this article, we are going to go more into detail about those two major differences, in addition to looking at some other differences between these two great species.

7 Big Differences Between Minks and Ferrets

Because minks and ferrets are both from the same mammal family they look very similar. Both animals are rather slender and have small round ears and sharp, pointed teeth. Furthermore, they both have short fur and rather long tails.

Ferrets and minks do differ when it comes to size. Ferrets tend to grow to around 20 inches long (not including their tail). Minks in the wild are a little larger as they grow up to 23 inches, but they are a little smaller when bred for farming as they only typically grow to 19.5 inches. As far as weight, ferrets tend to be between 1.5 and 4.5 pounds, and minks tend to weigh around two pounds in the wild and up to 7 on a farm.

As far as coats go, Minks have a very glossy goat. Ferrets also have short, soft coats, but they are not nearly as glossy. However, the coats come in very similar colors. Most ferrets and minks have dark brown or even black coats, though some are pale white with various markings.

In the wild, minks tend to only live for three to four years due to resource competition, predators, or other factors. However, in captivity, minks usually live for up to ten years with proper care.

3. Trainability and suitability as pets

Minks are much wilder and less domesticated than ferrets. Unless you know how to work with a mink and start when the mink is very young, they can even be rather dangerous creatures. However, for an experienced exotic pet owner, minks can be a lot of fun.

Nevertheless, minks are naturally wild predators. They have the capability to kill animals much larger than themselves, so they should not be allowed to be around other household pets such as fish, rodents, rabbits, cats, and even small dogs.

They also generally should not be allowed to be around small children, especially unsupervised. Minks have sharp teeth and powerful jaws. When they bite down on something, they tend to not let go, and they will nip when they feel threatened.

Because they can be so dangerous, many states across the USA do require some sort of special permit in order to have a pet mink. You should look into your local laws before bringing one home.

Ferrets, on the other hand, tend to have a much better temperament and are even very trainable. Ferrets are very intelligent and inquisitive creatures, so as long as you are patient and consistent, you can train your ferret to use a litter box or do any number of different tricks. When you do go to train your ferret, keep in mind that they usually respond better to a reward system than a punishment system.

As far as suitability, ferrets are great animals for individuals and families. They will enjoy spending time with other ferrets or even other household pets such as cats or dogs. Furthermore, your ferret will enjoy hanging out with people, which can be quite entertaining for your guests. While you should still be sure to know what you are doing, you do not have to be quite the same level of expertise to have success with a ferret as you do with a mink.

Minks are a very high-energy species. Minks like to run around and hunt in the wild, so in captivity, they will need plenty of space to explore and things to play with. When your mink is young, you can use a multi-level ferret cage, but you will likely want to get a bigger enclosure as your mink grows.

When you are planning out your mink’s enclosure, you should keep in mind that minks are very intelligent creatures. Minks are great at getting out of even cages, so you need to be sure that the enclosure is secure.

For the actual enclosure, a ferret will generally be happy even if you cannot give him quite as much space as you would need to give your mink. One ferret will usually be fine in a cage that is at least six cubic feet. The enclosure should be a minimum of 18 inches tall and 24 inches wide.

You can generally find decent ferret cages online or at your local pet store. When picking a cage, remember that ferrets have extremely sharp teeth and may try to chew their way out. For this reason, it is better to go with a metal cage rather than a plastic one.

In the cage, there should be hammocks to rest in, food and water, and toys to play with. You should also bring your ferret out of the enclosure to play and explore for at least four hours every day.

5. Differences in their diets

Minks are natural-born hunters. In the wild, they prey on relatively big animals such as piglets, snakes, and birds. Because minks are generally good swimmers, they will also hunt for water game like snakes, waterfowl, or even some frogs and toads.

In captivity, minks need their diet to be made up of mostly high-quality protein. You can talk to your vet to figure out exactly what you need, but generally, a high-protein ferret food, cat food, or some kind of raw protein diet will be good for your mink.

Ferrets are also predators, though they feed on small game in the wild such as mice or other small rodents. When hunting in the wild, ferrets eat their prey whole. They eat the meat, bones, tissues, and anything in the prey’s stomach when the ferret makes the catch.

When domesticated, you likely will not want to feed your ferret the same diet they would eat in the wild as it can get rather gross and messy. However, you will want to make sure that your ferret is getting a high-protein and high-fat diet with very limited carbohydrates and fiber. Your vet should be able to make a good recommendation to you for what kind of food you should be feeding your ferret.

As far as health issues go, minks are prone to a number of different potential health problems such as:

If you decide to bring home a pet mink, you will have to take it to a vet for regular health checkups. Before bringing home a mink, you should call the vets in your area to ensure there is one that is prepared to care for a mink because not all vets are. To stay healthy, minks do need regular vaccines, including vaccines for distemper, rabies, and other yearly boosters.

Just like minks, you will need to take your pet ferret to the vet for regular checkups. You should still call to see if your local vet is prepared to take care of a ferret, but it will likely be easier to find a vet for a ferret than a mink as they are more common pets. Your vet will be able to provide your ferret with all necessary shots for things like rabies and also give specific general care advice if you run into any questions or problems.

There used to be a third species of mink called the sea mink, which was found in the Gulf of Maine. However, today sea minks are believed to be extinct.

Though ferrets are rather common domesticated pets, their wild version is no longer all that prevalent in the wild. In America, there are only one species of ferret still found in the wild called the black-footed ferret. This species is extremely endangered and was at one point thought to be extinct. You can also find wild ferrets in a few different regions across Europe and Asia. However, in those regions, they are called polecats rather than ferrets. If you live in the U.S, remember to check that your state allows ferrets or minks before you bring one home.